Goya was born in Fuendetodos (Zaragoza) on Wednesday, March 30th 1746. And he did so under the igneous sign of Aries, that astrologically ‘governs’ the head area in individuals. In Goya there is no doubt of this predominance in its body structure.

Aries corresponds to the element Fire, which attributed the qualities of Energy, both in overcoming as in the constant search for new goals and risks. Fire is the most active and impulsive Zodiac element, applied in the natives a great self affirmation and thrust. Makes people aggressive, mark tireless beings, more than often wrathful, because they will want to be always the first in everything. 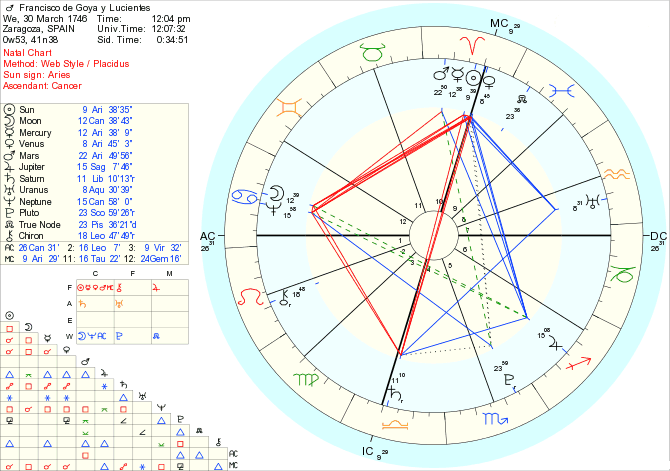 The planets mark an attitude:

If little was the influence of the corresponding element Fire that identifies him, let’s know through the analysis of their birth Planets (see graph of astrological chart) what tell us about his personality:

We see its Sun’s birth in the seasoned sign of Aries, which is accompanied by three more Planets with great power: Venus, Mercury and Mars respectively.

Being “combined” in its own sign, raises greatly its power over the life of the individual.

Recognized are the attributes of these Planets in the personality of Goya, even the appearance of the unbridled combativeness. All these Planets are extraordinarily empowered in the Fire sign of Aries. Even more, bodily the head governs in humans (paradoxically the amputation and disappearance of his head). Creating in this case an energetic set that, at the level of brain, will enhance the subject to extreme lengths in its action. Passion, struggle, creativity, intellect, come together in a ‘totum revolutum’ that seeks its tangible expression of a fierce and bitter way.

In addition, this planetary ‘set’, receives some strong aspects from other Planets. It is the case of Jupiter, the ‘expander‘, which offers a very positive aspect that helps in life for obtaining support and material benefits, especially abroad. The Moon’s birth, of vital importance to know the mentality of an individual, is located on the sign that governs Cancer, together with the planet of the psyche, Neptune.

The Moon symbolizes the maternal, childhood, home, the changes, the feminine side of life. The “gaseous” planet Neptune besides it, creates a high degree of confusion in the native and of no strength in these aspects, although reinforces the idealism and search for them. It creates difficult stages in childhood, where desire and reality move in a difficult whirlwind to control and assimilate. Sure situations that Goya lived in his childhood. But the driving force of his natal sign Aries, as long as he was growing, was forging a firm and hard character. Aries is the sign of the Warrior, the ‘wrestler of the Zodiac’. These people will never go unnoticed to others. For them if there is no struggle and confrontation, even if it’s only dialectic, they themselves promote it. They want and need their intentions and interests to materialize quickly, being very demanding with each other and with themselves.

His Planet Mercury in Aries makes Goya everything that his eyes see inspires him. His Planet Pluto, mythological Hades God of the underworld, connected with a strong appearance of idealists and psychic Neptune, lies in the mysterious sign of Scorpio. This sign is associated with all the unseen, to the deeper areas of our psyche. In Goya enhance capacity and need to “bring to light” all messages that are cooked in this `mental athanor’. The deaths, the underworld, the most ancestral fear of men are captured on the canvas with total mastery. The most varied torments of humanity, many often hidden within us, come to light with ‘chiaroscuro’ images. These planetary aspects demonstrate that Goya lived in first person those emotions, giving a special dye to his character.

When born, his natal Uranus, planet associated with the unexpected changes that do not depend on the native, stood in the sign making it stronger, Aquarium. This increases his overwhelming power doing that the subject lives many extreme situations that mark his life and his work.

Chronos, the God of Time, represented by the planet Saturn, is at birth also in a site of exaltation. The idea of Goya that ‘time devours his children’ is a purely “Saturn’s” vision of this native celestial influence. The “specific weight” of this planet in Goya is so great, will mark constantly its hard and up to rough relationship and communication with the environment and time playing live.

The ‘saturnalia’ tend to travel the more difficult roads, to experience on their own skin the pain and the wounds of the worldly realities. Goya not only lived a special time, but he was also involved in a large cast of characters and circumstances.

As any person with concerns and a wrestler right off the bat, generated controversy and resulted in radical changes in the messages of his painting. The planets could not be exempt to the analogy of his changes.

But what tells us his astrological chart?

I commented at the beginning that Aries, sign of Goya, governs the head in the human body. As a result, the Arians often suffer from strong headaches. It is more remarkable in this particular case because of the very strong combination of 4 planets in his sign. Aries governs the suprarenal glands, which are that pump adrenaline into the bloodstream in case of emergency, as in the “suddenness” activity or furor of the Arians, giving these natives its reputation for impetuous. A characteristic very marked in Goya. In summary, due to the “Government” of Aries on the head and the sum of planetary components strongly affected in that sign at birth, it is very likely that he suffered an infection of meninges of bacterial origin, since the bad position of the planet Venus in opposition to Saturn and square to Neptune, poisonings are favoured. This planetary situation also indicates a ‘lack of regulation’ of the level of calcium in the body fluids.

Where is the head?

But from the astrological and symbolic point of view, returns to stay clear the importance of the data. Until after his death the ‘universal master’ keeps us on tenterhooks. His Solar sign Aries, that governs the head, already heralded the importance of such a zone would be his life-long artistic and vital. After his death, the disappearance of his head is like the enigma that Goya accompanied throughout his life: the separation between the earthly and the ‘dream world’…

P.S.:  In traditional Astrology (we talk about thousands of years of existence), and that nothing has to do with the popular horoscopes or misleading predictions of the media, when birth time of one person is unknown there are two paths of research.

One; if it can be recognized and aware three or more dates by the individual to analyze, which recalls the approximate time of the incident which has been of importance for him, charting the corresponding to the movement of the stars (these are cyclical astronomically speaking) from his birth date to the aforementioned events. When it matches analog planetary aspects with which indicates his birth date we are approaching to the time of birth.

Two; when there is no possibility of having the previous data, in this case of Goya, we must make a psychological study of his personality, actions, and attitudes over time. This way we approach his intimate real intimate status to the archetype of the Ascendant where it belongs.  The Ascendant of each individual is given by the study and projection in the Celestial Plan, of his time, latitude and longitude of the place of birth. This gives us the division of the 12 zodiacal houses, which make up the scenario in which the person will manifest in life. In fact, when we talk about someone is born under the Aries sign, Cancer, Leo or anyone else, we only speak about Sun position at a given time. While the rest of the Planets and Zodiac houses, depending on time, latitude and longitude native, can infinitely vary the result…