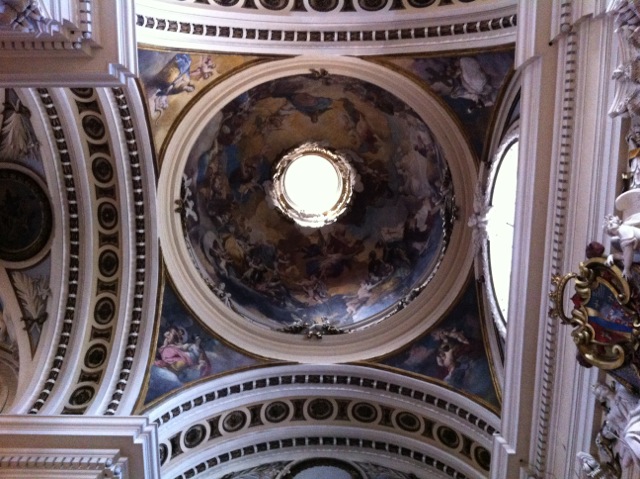 Today I had the privilege to climb to the scaffoldings that have been placed to restoration of the dome fresco painted by Goya in the Basilica del Pilar in Zaragoza.
To see that closely the huge figures painted more than two hundred years ago by Don Francisco has caused me conflicting sensations.

On one hand that of committing something improper, obscene. These images were not painted to be seen so closely or with violent lighting of halogen light bulbs used by the restorers. In the same way that it is not advisable to see with a microscopic the mites that live in the eyelash of most beautiful of women. It is a question of scale and distance, like almost all the issues are in the world. Goya never saw his work, and even less while doing it, so lighting. Or what means the same: he did not painted, because he did not see (and those who paint are eyes, no hands) what I have seen today. I imagine him painting numb with cold and tempted, and under twinkling candles or quivering oil lamps light. Psychologically handicapped by the criticisms of his brother-in-law and the Cabildo.

It is very noticeable that he had really wanted to finish it soon, to run away. Note also that was not a specialist decorator in fresco and painted “as he could”, with the bravery of his thirty-six years lived with courage, without anything ahead him. I have not seen as much-publicized “ease” in execution, rather I have seen anger, fury to resolve “one fucking way or the other” something that was falling through. “Ease” is the happy and exact lightness of Rembrandt drawings, but in this case is the opposite: there are fierce rubbings with brooms, like screams, against the damp wall. It is wrong to see these paintings relate to the action painting of American abstract expressionism or just the expressionism, or the Picassianan blur, or any way of painting that can be related to, although this has been imposed hundreds of years after he painted the dome. This makes him to be presented like a visionary able to stay ahead of his time, which really like historians, but thinking this seems nonsense to me that do not explain the question at all. What he wanted was to succeed, and for this had to paint like Velázquez and the frescoes coming out like those done by Tiepolo, but he had neither one thing nor the other.

Another thing that is noticeable is that sketches he must keep to are not exactly of him. I mean: his brother-in-law Bayeu was the director of the decoration of the Basilica and is not rare to think that he imposed, not only iconography, but the “way” of matter the issue pictorially. I even tend to think lovey-dovey sketches by Goya that are conserved in the sacristy of the temple seem to be too close to the ones of Bayeu which are exposed by its side, and is not unreasonable that Bayeu himself corrected some defects in his sloppy brother-in-law, for the good of the work. But I have a very bad thinking. However this would explain the “bad attitude”, brilliant but “without interest”, which is extended and translated to mural painting. 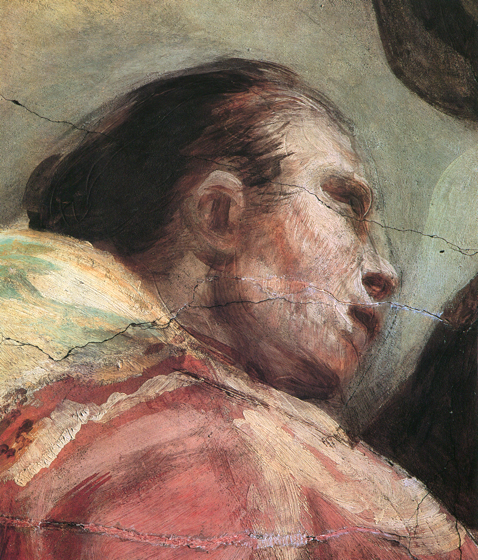 He does not use graffito to pass the drawings to the wall, as used to be common, but the drawing is traced with the help of a punch that when applying over the drawing scratches the wall still unset. There are not even half of the calculated figures in this way suggesting that most were undertaken directly without prior drawing. That he traced only the main ones, to get an idea of the scale and then he interspersed the remaining. He did the work in forty days, what means, he painted “the fresco way” only forty days, between December 1780 and March 1781, which is the time the work was done, although “repainted” in “dry” (something not very orthodox in that time) many of the figures. The time he used in making of the work is extraordinarily short for a work of this nature, which allows us to assume a physical and psychic condition beyond normal.
He had still many years of life and painting to show what he was capable of, but he did not knew it yet.

Posted on the blog of Pepe Cerdá and expressly authorized by the artist to be included in this www.realgoya.com