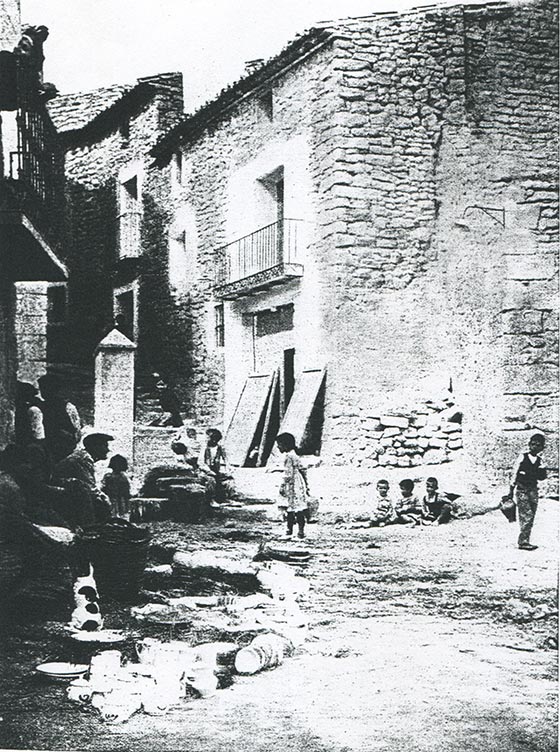 At the same time, Zuloaga advances money for the placement of the commemorative tombstone, designed and given away by Dionisio Lasuén.

In 1915 he finally acquired the house and built a school next to it, which opened in October 1917, as did the house-museum.

In 1918 publishes and pays a children’s book on Goya with a text that orders José Valenzuela de la Rosa.

He is already known as “the one who knows the most about Goya”.

They install a monument to Goya on a village high, next to the parish church. It is a bust made by Julio Antonio. ‘Ignite this monument Ignacio Zuloaga and his friends. October 19, 1920’. Among Zuloaga’s friends there are people interested, delighting in Arts, as Zapater told his friend Goya, antiquaries and collectors from Aragón.

The Union of Initiative and Propaganda of Aragón was founded on February 16, 1925, that at its meeting on March 15 of the same year and under the presidency of Don Eloy Chóliz, it agreed to contribute, with all the effort possible, to the celebration of the First Centenary of the death of D. Francisco de Goya y Lucientes.

The efforts of Zuloaga and his friends began to have the desired effects and at the first meeting of the Management Committee of this Centenary which was part of the SIPA, among other important agreements included the following:

“To carry out in Fuendetodos the following works: Building a School for Girls; Town Hall and Hostel; Expropriate some land and old houses in order to give all possible visibility to the house where the immortal deaf was born, and in the plot that results, to project a square in the center of which will try to place the statue of Goya that was removed from the Museum of El Prado, original by Llaneces, supposing that the transfer to Fuendetodos is obtained; To divert Goya Street, so that it has a direct entrance on the road and proceed to its paving.” Except for the sculpture of Llaneces, the square now in existence resembles much the one then projected.

On March 8, 1926, the Goya Centennial Board met in the Rectorate of Zaragoza, it was agreed to appoint a Board of the ‘CASA DE GOYA’, which would have as its purpose to deal with everything related to Fuendetodos and to ensure the prestige and improvement of what with Goya is related in that locality. Mr. Ignacio Zuloaga was the Vice President of the same and Secretary the representative of the SIPA; Vocals, Mayor, Priest and Master of Fuendetodos. Little, in substance, changed the town and its relationship with Goya, except for the new Girls’ School, inaugurated on September 14, 1930.

As reported by the provincial architect Don Antonio Chóliz in his speech in “La Cadiera”, on October 23, 1981, “about the Town Hall and the Hostel was never known, as the rest of the proposals. Because one thing is the enthusiasm and generous impulse of the SIPA, the Artists of Zaragoza, the University, the Association of Architects and the Press Association…” of rurality, of love for the people, moral support to Goya and Fuendetodos that owes Zaragoza and Aragón, and another very different reality. And in greater abundance “was an unforgivable injustice in the way that Fuendetodos was treated in the liquidation of that fateful Centennial Board, which, instead of rewarding its yearnings for redemption, cruelly punished it for not yielding to baseness that disgusted it”. But let us draw a veil of forced oblivion and let us see with optimism how little or much it has been doing until today.

“When the house of Goya was expelled during the Spanish Civil War, once the peace was restored, the SIPA easily obtained from the neighbours of Fuendetodos that they graciously ceded furniture and furniture to replace the disappeared from the first conditioning made by Ignacio Zuloaga”.

The story since then is much better known and now without the contribution of its transformer, its best activist, that great fighter that was Don Ignacio Zuloaga, to whom Fuendetodos and Aragón owe him all the respect, recognition, admiration and love he deserves. Goya and Zuloaga made themselves and they alone, or almost, forged their respective personalities that many Aragonese knew how to recognize and admire. Also in life, they suffered the emptiness of the authorities and of those, being able to do and to be positive, did not want. He left open the way that we all should continue to trace, for the sake of Goya and ourselves. 189 years have passed since the death of Goya and we continue to have the good fortune that we hope that others will come someday and Fuendetodos will reach the dream of Ignacio Zuloaga and those who with him and his spirit have collaborated, then and now.