Botín Center of Santander, built by Renzo Piano, exhibits eight dozen of drawings by Goya. Genius is considered to be excellence contrasted in several fields. Goya is a fairly obvious case because he came to dominate several aspects of his craft: painter, engraver, draftsman. There is no one able to cover it in all its facets. Hence his greatness, which grows with the passage of time. Goya traced, blotted, painted, a thousand drawings. Let’s say he produced a drawing every two weeks for forty years. Obviously not all of their blots are impressive. But, has the shady grace to, if it can say so, always stick with some disconcerting drawing. They are not theirs, the “academies”, say the Bayeu drawing or Mengs. Ceán was saying with gracious in his Dictionary, which became literally sick, when he saw Mengs rip, smash a picture, throw it in the fire, because the bohemian was not satisfied. There have been astonishing, glorious artists such as Raphael or Rembrandt. Velázquez has barely left two or three sketches by his hand. Goya felt heir to Rembrandt in the engraving, but as a draftsman, I would say that he followed the wake of Guercino, a master of the baroque “aguada” (watered). Let’s say a great skilful watercolour artist with the secret tones of Chinese ink.

In Santander, in the Botín de Piano, we can see a clear example of the Goya Guercino, “Socorro”, 1820, which should be called “Piedad”, where we see a lady and her waitress, suck an old woman crouching on the floor. 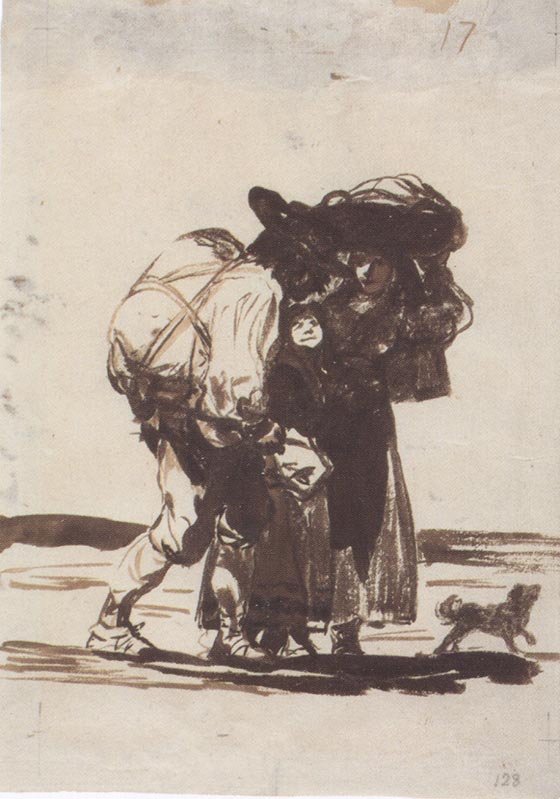 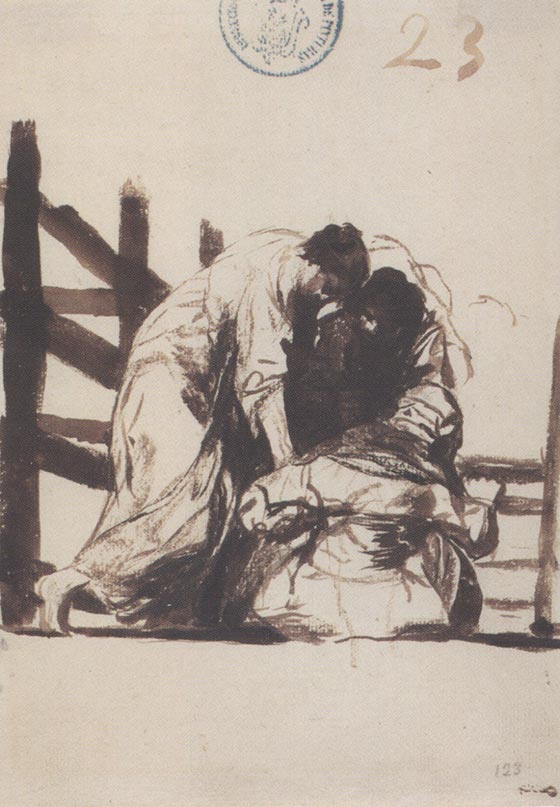 The atmosphere of light and abrupt twilight gives off the scent of an adage by Schubert. The box of the previous print, “To the market” could be a hybrid of Rembrandt and Guercino. Well, I see two good examples of Goya’s top as a cartoonist, but not with a greasy pencil, but with a brush on the water.

Sooner or later, swallows the Goya of nonsense drawing, like “Thing of Magic,” where we see an ecclesiastic of course, a canon in his pompous robes, consulting a crystal ball, while flying through the air. The Goya of the Disparates is unique, unmistakable. His visual humour is dazzling.

However, sometimes it seems to go wrong, as in the “Saturn”, where a stamp of terror is almost funny. An old cannibal, a Caliban of Coso, cannot devour human bodies with Voltaire’s smile, like someone eating a Haagen Dazs ice cream. 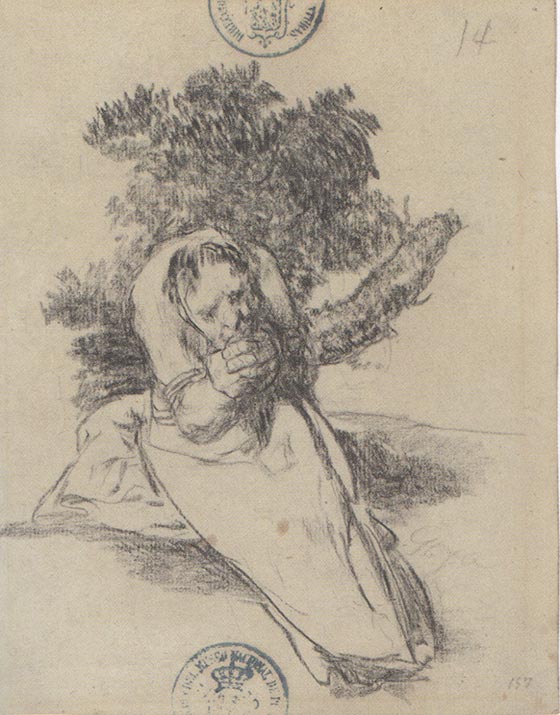 The drawing “Maniatado”, 1824, reflects his days in Bordeaux, and we see an old man in a pose to the San Jerónimo, a French hermit, hmm, but with the feet embedded in a kind of sack of strength, which I imagine were used in hospitals to reduce the insane. The scenery is succinct, the branches of an oak and a “stump”, a bare branch with a phallic print. What evils does this poor old man grieve? Are the evils of the fatherland, of the absolutist Madrid left behind, or are the evils of age, the winter of Vejecía, of which Gracián spoke? There is a precious letter of that time in which he cannot be more open about the miseries of the octogenarian: “Thank me these bad lyrics, because neither sight nor pulse, nor pen nor ink, I lack everything and only will I have left,” 20 December 1825. And in another moment of that glorious missive, he jumps with a shuffle of fine zumba, when he is invited to copy himself, recycling the Caprichos: “I have better occurrences in the day.” That is to say, with one foot in the tomb, the Colossus of Saragossa, despite being half blind, without pulse and without money, drudged in the port city of Bordeaux, cruel port of bells in that time, as it was Lisbon, sidestep the artist who knows better than anyone, the tricks of his trade. At good time, they ask to him to make whimsical courtiers again, “I have better occurrences today”. You cannot say more with less words, a Seneca-Martial of the Coso.

From the very earliest time, 1799, Godoy’s time, is the soot-soaked watered, titled “El encuentro en el paseo”, where we see a brave gallant, planted before a pleasant on her back. flirting. The guy poses as a farmhand dressed as a fitter, open legs, hands behind his back, and mop of hair of Jacobin snob. It looks like a portrait of Bonaparte, when he was still consul, but the hair of the imperial meadow was already visible. Machado portrayed Azorín as a reactionary by disgust of the Jacobin mop of hair.

Azorín was a good reader of Montaigne, a French Frenchman as a few. Beside him, Bonaparte is a fool with imperial fumes. In any case, how far away was Goya, suspecting that the Corso would destroy his hometown, because we leave behind nauseous villagers, in his picture of the cathedral of Seville, he signed, as a citizen of Cesaraugusta. Lighter, water.

To end the tour, the spectator may well stop at the “Eat a lot” plate, drawn in Bordeaux, almost with his foot in the tomb. 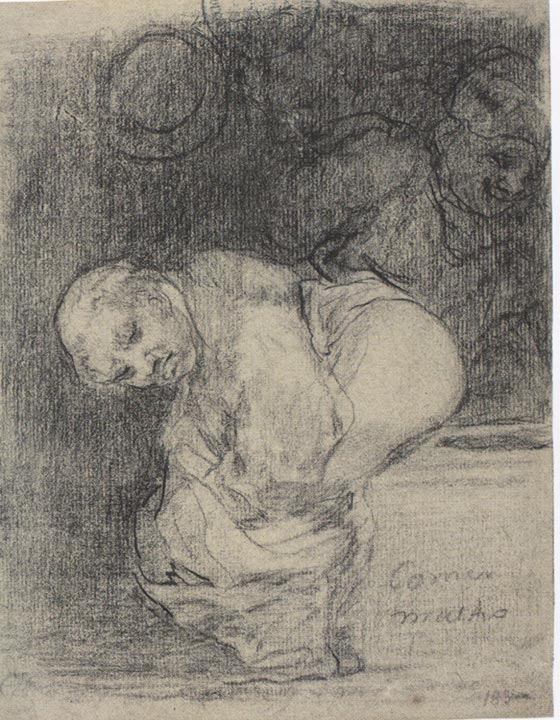 We go back to the infinite humour of Goya. It catches and amazes us with the figure of an old man that relieves his belly. The admirable thing is to capture in such an action, perhaps the dullest possible, an aesthetic side. No one has ever drawn a more apolitical ass and is as if compensated by the symmetry of the face, which could well be a self-portrait, which adds a plus of Martian joke. I would name that print as “Ass face”, to pay the genius for his own coin. That said, Goya’s exhibition of drawings in Santander is worth the trip.