On past October 2nd some self-proclaimed anarchists (Insurrectional Command Mateo Morral) placed a home-made explosive device, low power, in the Basilica del Pilar in Zaragoza. The terrorist cell is named after the anarchist who attacked the King Alfonso XIII in 1906. The bomb, loaded with two kilos of black gunpowder and a clock activation system, was placed under a bench and the named via sacra of the main altar, very close to the choir and superb organ, that must be restored. It exploded at 1:50pm and caused material damage destroying several banks and was detachment of plaster from the ceiling, large dust but no casualties, except one lady who suffered an injury in her eardrum, and despite at this time there are usually still prayers in the Basilica, and also at that time the students of two schools from Zaragoza and Valladolid were in the temple on a guided tour.

It quickly became national news and the memory of the vast majority of the people of Zaragoza and many Spaniards carried back to the unfortunate August 3rd 1936. At that date, two weeks after the Civil War begun, a Republican Fokker took off from El Prat aerodrome in Barcelona, around 1 in the early morning, bound for Zaragoza.

It was piloted by Second Lieutenant Manuel Gayoso Suárez, military aviator in a supernumerary position and at the service of the Spanish Postal Air Lines L.A.P.E. (Líneas Aéreas Postales de España). There are reasons that lead us to suppose that the aforementioned Gayoso made such action without receiving the command to do so and only with complicit approval of the head of El Prat aerodrome, the aviator pilot Felipe Díaz Sandino, Lieutenant Colonel of Infantry; although, indeed yes, interpreting the feelings and opinions of the republican authorities from regional Government of Catalonia. The three-engine plane piloted by Gayoso carried four bombs of 50 kg. each and arriving to Zaragoza, shortly after 2 in the early morning, gave several low passes flying 150 metres high and almost touching the towers of El Pilar. 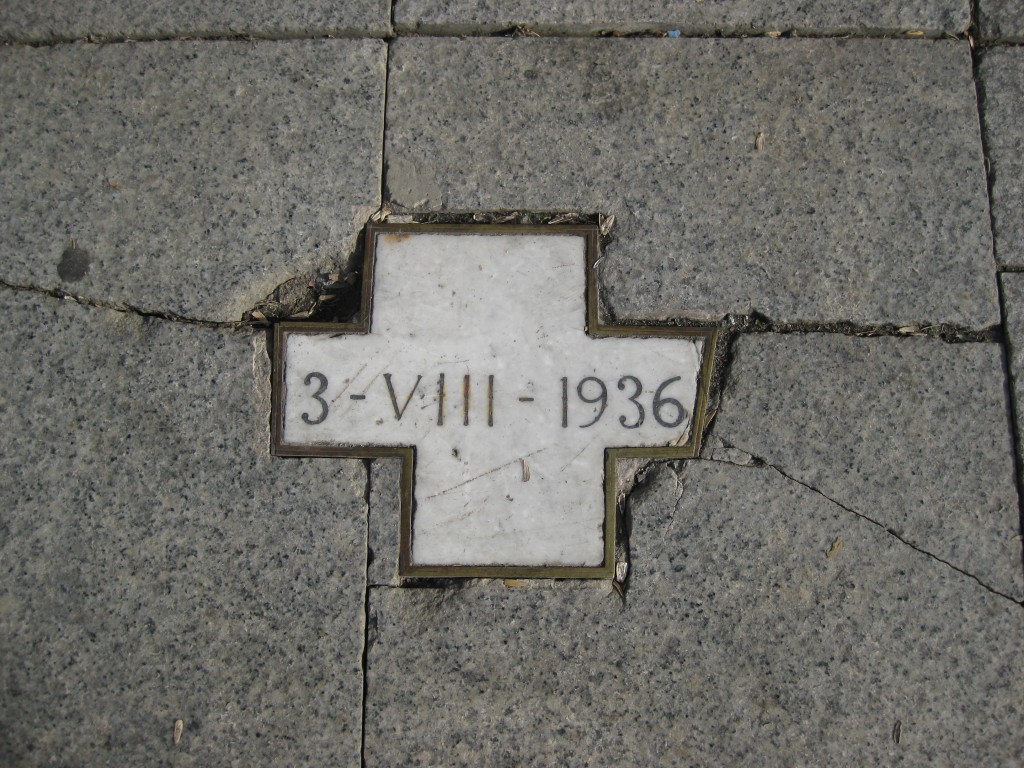 The most reliable versions say that quarter to 3 the pilot dropped three bombs, manifestly directed towards the part of the temple in which is venerated the image of the Virgen del Pilar, but none exploded. There is also who added that launched the fourth bomb, which fell directly in the river Ebro. It is found that one of them was riveted on the street, a few meters away from the main façade of the temple and, after getting several paving stones, left a silhouette of a cross on the pavement. 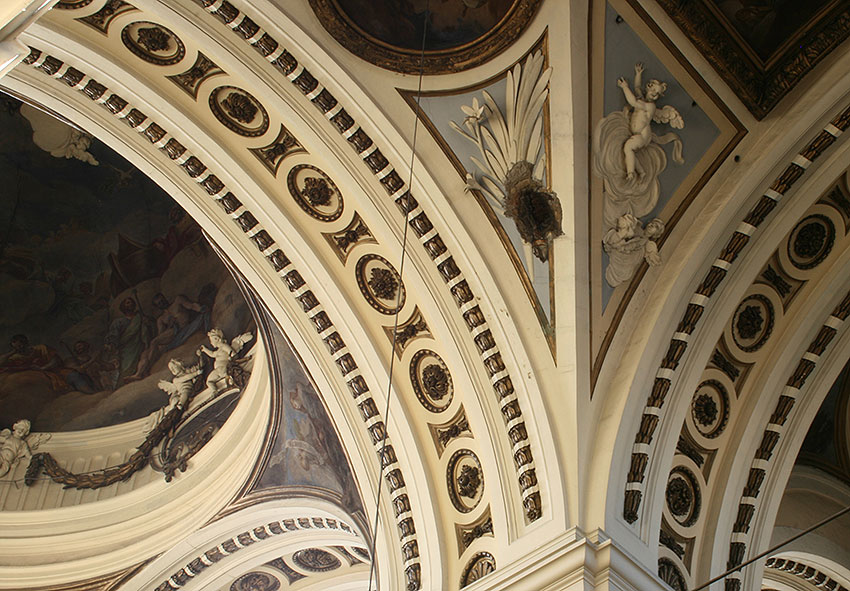 Other two artefacts fell on the Basilica, one crossed the exterior dome giving on the nerve of discharge of the Holy Chapel dome. The other fell very close there, also through the exterior dome and ceiling to make an absolutely visible footprint through this and the Goya frescos on its bottom right side, as well as in the adjacent border. They showed the intent of the pilot to damage the very heart of the Basilica and, no exploding, caused damage more of artistic type than material.

So none of the bombs came to explode in spite of assuming that its fuses were working correctly, because otherwise is totally absurd to make a whole night raid of war with no result. There are those who believe that bombs had no fuse or that were disabled, what is hard to believe but at the end is already the least. 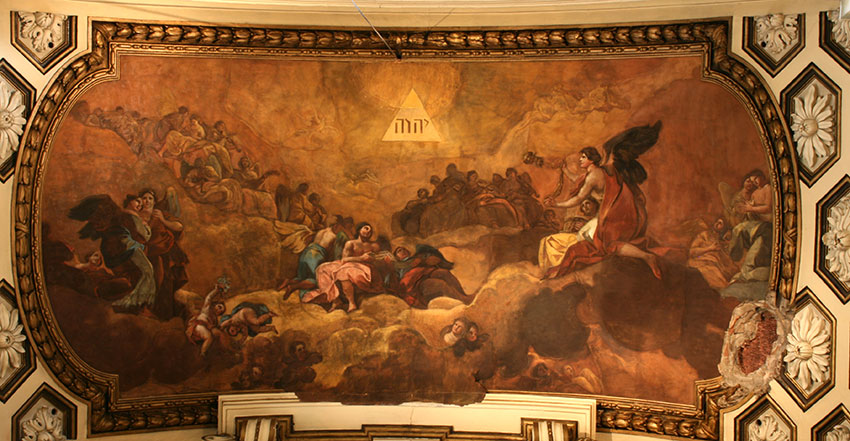 The truth is that occurred hugely important artistic damages because the fresco painted by Goya in 1772 to the bandstand of the Virgin, representing the “Allegory of the Divine or of the Glory” according to the Earl of Viñaza or from Gudiol, the “Adoration of the name of God by the Angels”, was directly attacked in so wild as in hallucinating aggression. Would never think Francisco de Goya that this works, which sketch was approved by the Cathedral chapter for being “a piece of skill and special taste”, would be so directly involved in a brutal and hateful attack on his Virgen del Pilar, and that, in addition, since its inception is a very notable and important part of the artistic heritage of the Nation.

That very same morning of August 3rd was carried one of the bombs to the company Talleres Mercier, specialized since many years before in the production of war material, for its study and disarming. It is assumed that was elected the one founded in better general condition after the attack. Talleres Mercier would be militarized two days later, on August 5th, and was settled in its premises the Regional Commission for the Manufacture of War Material in Aragon, under the overall coordination and leadership of Colonel of Artillery and industrial engineer don Antonio de Diego García who, as a Lieutenant Colonel retired, had been incorporated into active duty with this mission. But Talleres Mercier not only leaded these tasks, but it also practiced the coordination of work in other factories in the area.

With one staff more than trained and used to precision and special technical difficulty, work proceeded to fully copy the bomb, because the model was non-existent in the national side, and its subsequent manufacture in series. The two remaining bombs, restored and nickel-plated, are displayed on a pilaster of the Holy Chapel with a legend that says: “Two of the three bombs thrown against the S.T.M. DEL PILAR, on August 3rd 1936″

As evidence of not only technical but also artistic skills of Talleres Mercier and its staff, is good to recall some of the pieces performed by the worker Venancio Serrano, author of a few copies of artillery shells, 10.5 cm calibre, sculpted in the warhead with the image of the Virgen del Pilar. It highlights among them a singular piece depicting the bombing of the Basilica, in an artistic style naïve and truly lucky. 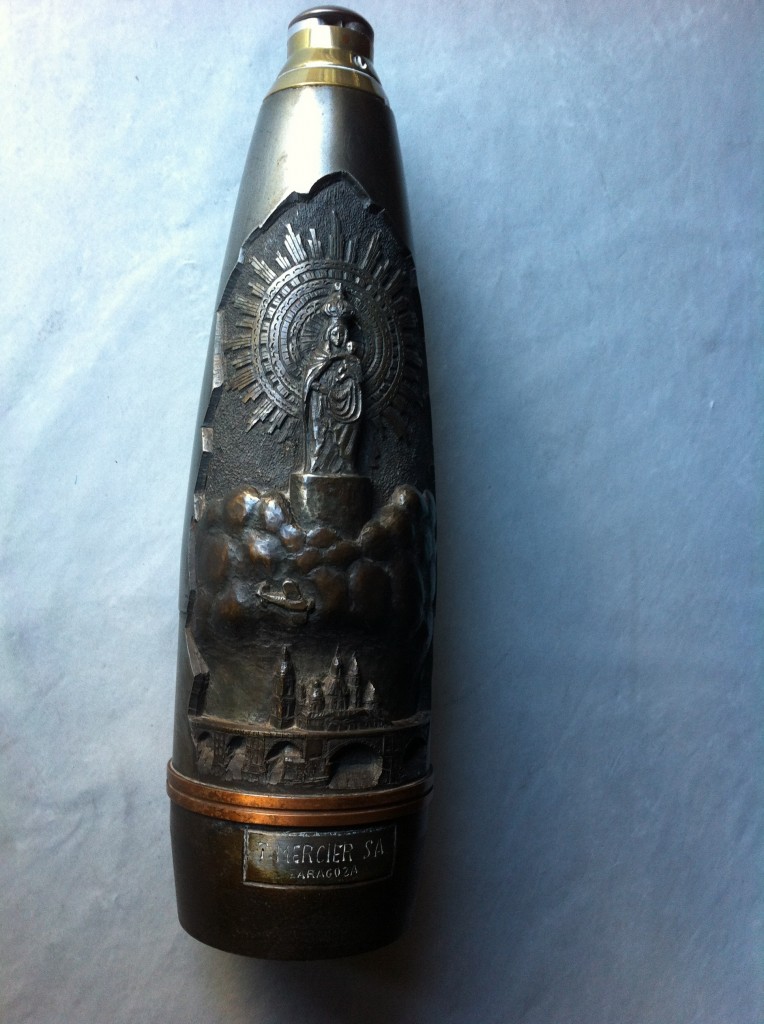 Because of this involuntary way were united, once again, the illustrious master Francisco de Goya and the Virgen del Pilar, patron saint of Zaragoza, Aragon and Spanishness, to whom Goya himself refers in a letter to his friend Zapater in July 1780 that “for my house I do not need many furniture, because it seems to me that with a picture of Nuestra Señora del Pilar, a table, five chairs, a frying pan, a boot and a tiple and grill and lamp all else is superfluous”.