(Back to Cartuja of Goya)

Julián Gállego published the first book about Goya’s paintings in the Cartuja of Aula Dei in 1975. My love to the painter of Zaragoza, not of Fuendetodos, in spite of whoever gets upset, as at five was confirmed in San Gil church of Zaragoza, I owe it to Professor Gállego.

But the best medicine, the best antidote against the acute goyitis, I also owe it to him, because Julián Gállego was perhaps the person who best knew the life and the work of Velázquez.

When Goya turns heavy, the best remedy is to seek calm in Sevillian pictures.

As well and all, they have something in common, some kinship keep the major painters of the Spanish painting. Goya was the first that recorded and made prints of Velázquez pictures. Was his first 18th century fan.

But, the reader must be impatient for how much I take to get into Goya’s flour. 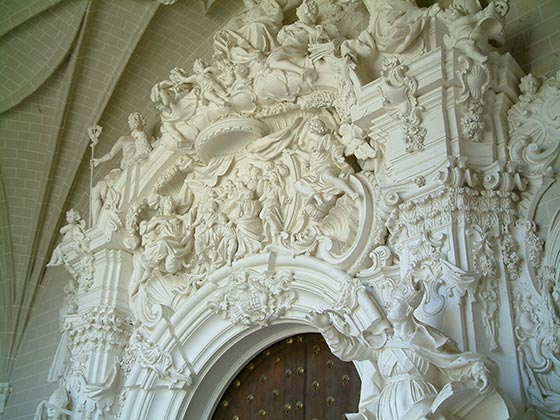 The Cartuja of Aula Dei is close to Zaragoza, about ten kilometers, and there became seasoned the young man Goya as a great murals painter, the largest enterprise had in his whole life. The Cartuja was abandoned in the 19th century and the rigor of its winters, the mists of the river Gallego, caused severe damage to several murals eaten by the saltpeter, which Buffet brothers repainted circa 1900 with new designs, although it is very likely to follow the master blurry lines of the goyescas scenes.

Not in vain, wrote with a great aphorism, time also paints. Rigorous winters, the French modernist painters, the successive restorers of Aula Dei, even the experts, the goyistas with smoke and the beginners, all want to paint in the Cartuja of Goya, and the geezer of Bordeaux makes a mockery of all of us; you here do not paint anything, pedantic.

I have visited the Cartuja this last summer with some friends from Oxford delighted by the magic of the place and by the paintings of Goya. It is like visiting Piero della Francesca in Arezzo or Rafael rooms in the Vatican. In Spain it is the only similar place in charm and beauty. My previous visits back to adolescence, around 1968, with fifteen years old.

At the scene of The Visitation pays powerfully our attention a wall of Burgundy wine colour.

It is the home of Zechariah, Isabel’s husband, Mary’s cousin. Zechariah has a bearing, a poise, a packaging of a prophet that emerges from the cave of a Cretan temple. Is like another painting, another scene, within the theme of the picture. A mythical parenthesis, would say, in the trace of the scene. The eye of the good painting taster is perplexed at this superb combination, the Carmine colour wall, old cherry colour, Damascus fatigued colour, wine old colour, that to a fan of Rothko can leave him stunned, looking to the Nile, and from the mysterious character, with fluvial beard, like an amnesiac Homer that has just stumble with the Minotaur or Polyphemus in the cave of his gloomy home. 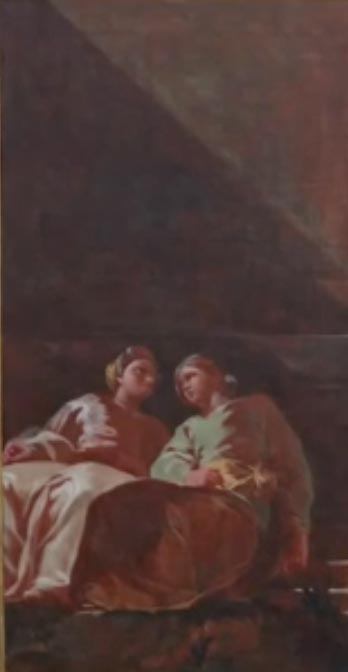 Where did the young Goya take out that scene? In whom he thought, because by itself is worth the visit to the Cartuja of Peñaflor?

For me is the top of the mystery of the Cartuja of Goya. Is like the first scene naïf and terrifying at the same time of the future Black Paintings. 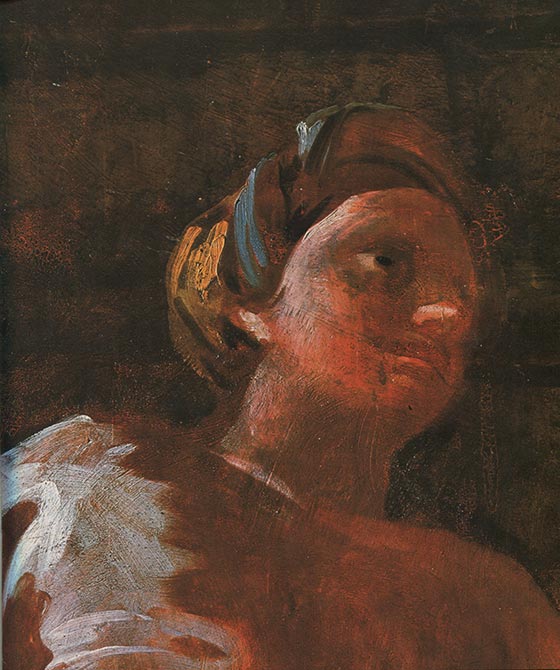 By the way, in the Goya’s cupola of El Pilar, I have been able to see up close the St. Lambert (28 March 2007), a Saint of Zaragoza with the head in his hand, and it is a creepy figure, despite being surrounded by Saints in Glory.